On July 7th, we lost Deputy Mayor Pam McConnell, at the age of 71. As a newly elected councillor in 2010, Pam was one of the first people to welcome me to City Hall and always made time to provide advice and guidance.

Not only were our offices located side by side, so were our wards. I had the honour of working collaboratively with Pam and her incredible staff on issues that affected our adjoining neighbourhoods. It was a true pleasure to work side by side with her at City Council.

As a progressive politician, I have personally learned much from Pam. Whether it was apparent to or not, Pam always had a plan in place to make sure the decisions that mattered most were made. Whatever needed to be done, Pam made sure it happened.

For over 35 years, she has been an effective city builder, first as a school trustee, and the last 23 years as a beloved City Councillor. Pam was a tireless champion for affordable housing, community revitalization, poverty reduction, and gender equity. At City Council, she was a well-respected political force.

Pam oversaw the redevelopment of Regent Park, one of Canada's largest community revitalization efforts. From 2004-2010 she sat on the Toronto Police Services (TPS) board as both Chair & Vice Chair. During this time, she worked to address racial profiling in the TPS and challenged the police complaints system to ensure better oversight. Most recently, Pam has been leading the implementation of Toronto's first Poverty Reduction Strategy.

Above all, Pam was a fighter. Over the past year, she has struggled with her health, but you would never know. She never complained. Through it all, Pam made sure that her communities was served.

My sincerest condolences go out to her family, her husband Jim, daughters Heather Anne and Madelyn and her four grandchildren that she was so dedicated to.

Pam, you made Toronto a better city and forever I am grateful to have called you a mentor and more importantly a friend.

The impacts of climate change are having a profound impact on our city. They include extensive ravine erosion, the flooding of Toronto Islands, and the local emergence of the West Nile Virus. The results of rising greenhouse gas (GHG) emissions warming our planet inflict a very real cost on our city socially, ecologically, and economically.

Last week, the City's climate change plan known as TransformTO was unanimously approved. This plan has 23 strategies that must be implemented entirely to achieve an 80 percent reduction in GHG emissions against 1990 levels by 2050. The ambitious goals include having 100 percent of new buildings be built to near zero GHG emissions, having active transportation account for 75 percent of trips under 5 km city-wide, and diverting 95 percent of all waste by 2050.

While City Council adopted the plan in principle, it has committed $0 thus far to the actual implementation. Instead, city staff have been directed to pick apart the plan and value each of the strategies individually, which could lead to parts of the plan going unfunded. This is not acceptable. TransformTO is not a report on 23 individual ways to achieve an 80 percent reduction in GHG, it is one report with 23 interconnected and interdependent strategies that when implemented together will get us to our 2050 goal. The plan needs to be kept whole and fully funded as such, as not mitigating the problems created by GHG will cost the City billions more in the long run if City Council fails to lead with purpose and outcome.

On other matters of significance, the warmer temperatures also bring an increase in health and safety concerns, and our communities downtown—still suffering due to the ongoing opioid crisis—have been feeling it. Our office has been working with a myriad of agencies including Toronto Police Services, Streets to Homes, the Toronto Parks Ambassador, and residents to try and address this spike. We have been leading safety walks with residents and community agencies to pinpoint specific actions to reduce harmful behaviour and improve safety. If you would be interested in having a safety walk in your community, please contact our office.

As the summer kicks into high gear our office will remain open to assist you. We are always just a phone call or email away. Whether you are travelling abroad or enjoying the many festivals that grace us each year, I wish you and your loved ones a safe and happy summer.

I remain yours in service,

City Council voted in favor of adopting The Pathway to a Low Carbon Future report. This includes setting long-term goals to achieve an 80 percent reduction in greenhouse gas (GHG) emissions against 1990 levels, through provisions including: near zero GHG emissions in all new buildings, improving existing building efficiency by 40 percent, achieving 95 percent waste diversion, and other important measures.  While City Council adopted the plan in principle it has committed $0 thus far to the actual implementation.

City Council voted in favor of moving forward with the King Street Transit Pilot between Bathurst Street and Jarvis Street. The Pilot will test new roadway uses on King Street, prioritizing public transportation, providing designated delivery areas for businesses, and reducing car traffic to only immediate destinations. If shown to be more effective than the current measures, the pilot plan will be adapted and implemented as a long-term solution to the gridlock on King Street.  The pilot will begin in late fall 2017.

1) The creation of a new Seniors Housing and Services entity that is more directly accountable to City Council that strategically aligns City programs and services for seniors.

The report also calls for development of an interim 2018-2019 funding model, to be submitted through the 2018 budget process.

City Council voted to undertake consultations on the potential implementation of a tax on vacant residential units in Toronto, as well as establishing public utility use metrics that can help to identify such properties. These consultations will take place in the coming months with a report back to the September 26, 2017 meeting of the Executive Committee.

Towards and Action Plan for Transgender Youth

City Council approved the creation of an Interdivisional Working Group to work with the Trans Youth Advisory to develop a trans-inclusive service action plan across City divisions and to report to the November 16, 2017 meeting of the Community Development and Recreation Committee.

City Council approved the draft guidelines in Growing Up: Planning for Children in New Vertical Communities. This planning document establishes directions for the City to better plan for children in neighbourhoods undergoing rapid development. This includes neighbourhood guidelines like parks and school facility goals, building guidelines like amenity spaces and built form, as well as unit guidelines to accommodate families.

City Council voted in favour of a motion by Councillors Wong-Tam and Ainslie to re-constitute the City's LGBTQ2S+ Community Advisory Committee. The committee had been disassembled in 2006. The Committee would provide City Council with community-informed advice to consider when making decisions that impact this very important part of Toronto's population. Ongoing advocacy and work around the Action Plan for Transgender Youth, LGBTG2S+ transitional housing, HIV/AIDS, housing, and other services have demonstrated that there is a need for regular, informed engagement.

If you're strolling through Ramsden Park, you can see that the Phase 1 upgrades, including the new children's playground and tennis courts, are now in full use. Now that the rainy weather has eased up, crews are set to begin Phase 2 of construction.

Phase 2 is expected to proceed throughout construction season 2017, and conclude in 2018. Changes will include: an upgraded dog off-leash area; upgraded Hillsboro entrance, with accessible ramp; a new multi-use sports court; and upgraded Yonge Street entrances and pathways. Crews will also be installing new park furniture, and landscaping to give the park a beautiful new look.

Please note, the dog off-leash area will need to close briefly during construction. Closure is not expected to occur until after Labour Day, and work will be completed within 2017.

For more information regarding alternate Dog Off Leash areas, please visit this link!

Building Roots and Collective Community Building Initiative present Unity in the Community in Allan Gardens! Join local community organizations, and faith groups, for a family-friendly celebration in Allan Gardens.  The day's activities will include food, live music, and activities for kids!

Solid Waste Management services has been rolling out new green bins across the city.

The new green bins are twice the size of the old ones while taking up a similar footprint, and have a racoon-proof locking lid to prevent our furry friends from getting access.

Residents will begin seeing them delivered in Ward 27 starting on August 22, 2017.

You can learn more about the Draft Pollinator Protection Strategy by clicking here, and share your views by taking an online survey. Bee part of the solution!

The City of Toronto is proud to be one of the hosts of the 2017 North American Indigenous Games.  More than 5,000 athletes will be attending along with thousands more volunteers and spectators in celebration of Indigenous heritage and sport.

The 2017 North American Indigenous Games will take place on traditional territories of Canada's First Nations. The territories include the Huron-Wendat Nation, Metis Nation of Ontario, Mississaugas of the New Credit First Nation, Mississaugas of Scugog Island First Nation and Six Nations of the Grand River, the traditional inhabitants of the lands of the City of Toronto, Region of Hamilton, Durham Region and surrounding areas.

Formerly the Good Neighbour's Club, Haven Toronto is a sanctuary for elder men who are experiencing homelessness since 1933. Their location at 170 Jarvis Street provides healthy meals, clothing, recreational amenities, medical services, counselling and much more, providing their clients with dignity and respect. They are open from 8am to 5pm, 365 days per year.

Initiatives Haven Toronto is involved with include The Good Wishes project, a program that provides people experiencing homelessness and receiving palliative care three simple "wishes" to help ease their end-of-life.

You can find out more about Haven Toronto by visiting their webpage at http://www.haventoronto.ca, or watch some videos of their work by clicking here.

If you have a community organization or individual you would like to see mentioned in our newsletter, please send a 100 word write-up to our office at councillor_wongtam@toronto.ca! 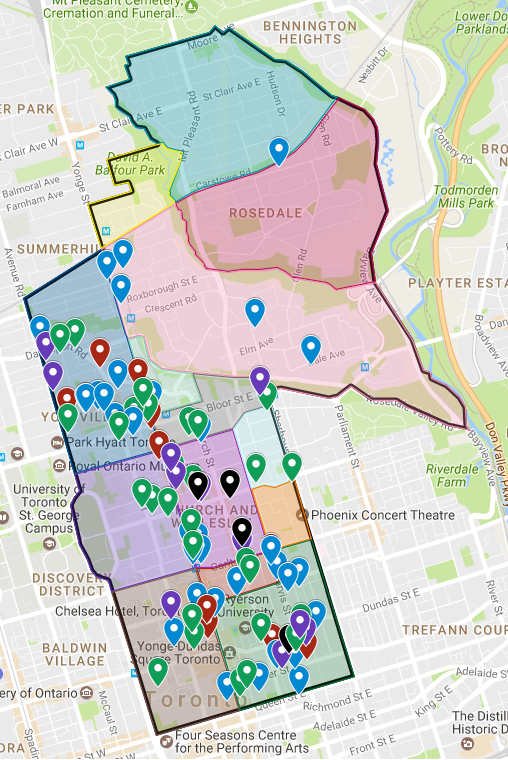 Want to learn about current and upcoming development in your neighbourhood? The Ward 27 Development Map lists every application for a zoning by-law and/or official plan amendment received within the last 5 years. You can view the status of the application, learn briefly what it's about, and find links to staff reports, applicant reports, and more. The map also includes information about local neighbourhoods, including who your Ward 27 staff contact and how to contact your local residents' association.

The development map will be regularly updated, with new applications and information when applicable. The map does not include Committee of Adjustment applications. If you see anything that you feel should be on the map, please contact edward.larusic@toronto.ca.

For more information and to view the map, please visit http://www.ward27news.ca/development